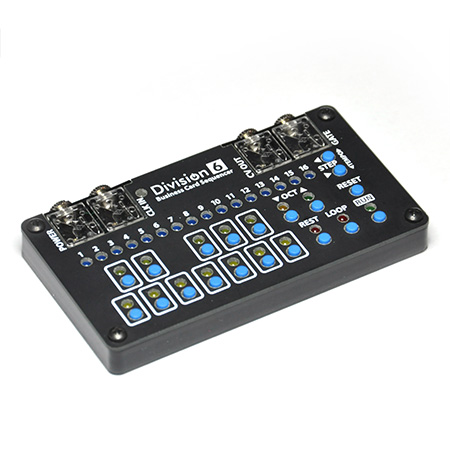 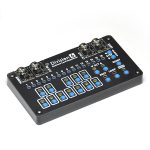 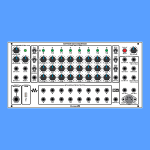 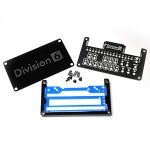 V2 is here! The BCS packs a lot of sequencer into a tiny package. This 16-step circuit can work as a sequencer or as a handheld keyboard.

Available from one or more dealers ➜

The BCS is a tiny 16 step sequencer that provides CV and Gate out. It can also be used as a handheld CV keyboard.

Boards for this fun little kit were handed out to everybody who attended Knobcon 2016. If you’re wondering what to do with your board, or want to get one of your very own, you’ve come to the right place.

The sequencer has its own internal clock to get you up and running in a hurry, but you can connect an external clock if you need greater control of tempo or want to sync with other devices.

This module has lots of LEDs and is very shiny, but only two of them are ever on at a time which keeps it from loading down your power supply.

Note: All Business Card Sequencers ordered from this point forward will have v2 firmware

The Business Card Sequencer is available in several versions:

The sequencer is all built, tested, and ready to go!  Just connect it up and start sequencing.

Built, ready to go, and installed in a custom enclosure.

We send you a board and a bag of parts so you can build it yourself.  Difficulty level = medium (it’s all through-hole, but some of the soldering is kind of small).  The kit includes:

If you’ve already got plenty of parts in your junk drawer or just want to source your own components, you can get this PCB/Chip combo.  Includes:

Order one of these to upgrade your existing sequencer to v2

We also have a fiberglass/acrylic enclosure available for the sequencer if you aren’t into the bare PCB look.

Notice: Orders are taking an unusually long time to arrive due to Covid 19 Dismiss